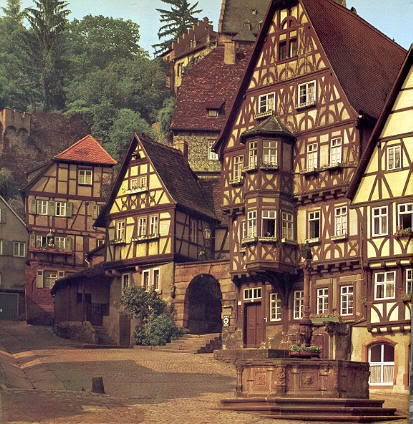 The Nentir Vale has suffered much in the last centuries. A near complete takeover by the Horned King left the largest cities in ruins and smaller towns in nothing but ash and soot.

Today, the citizens of Fallcrest struggle to rebuild the once great city, while smaller burg and hamlets spring up across Nentir, taking advantage of the rich soil and abundant resources…

But civilized society has only just climbed back from the brink. Petty overlords and bandits who deem themselves rulers could destroy what shreds of the lawful world are still left.

But there are those who would stand against the darkness… and their destinies begin in the most humble hamlets, inns and taverns sprinkled across the Vale.

The heroes attempt to sneak in to the bandit “hideout”.

We could build a giant badger...

The heroes attempt to coax the bandits out with some subterfuge. Just how many times do they think they can attempt this tactic?

Everyone hates brigands, right? It seems the remnants of the Iron Circle may have turned to petty bandity, or is there something more sinister afoot?

The Iron Circle is turned back at Albridge, but not completely defeated. The heroes must thrown the knock-out punch before reinforcements are summoned.

Nazin Redthorn and his men attack Dar Gremath’s headquarters. The heroes must race to the rescue.

The heroes must defend the forward command post (otherwise known as Earst’s farm) from a counter assault by the Iron Circle.

The Iron Circle assaults Albridge. Can the heros hold them off?

Chapter 3.6 - Down to the Crossroads

The Iron Circle is marching on Albridge, but the rebels still need time. We need a diversion…

The party needs the Elves to assist the rebels in Harkwenwold. But they ask a favor in return…

Traveling south, the band holes up in the ruins of Marl “avoiding” Iron Circle patrols.