Did you pick a background trait? What is the story/reasoning behind the trait?

DISGRACED: My father, a human, was a chieftain of a remote tribe in ________, and as his only offspring, I was raised to replace him. After years of training, the time came for me to complete the great hunt, in which I would slay a mystic red stag and take my place at my father’s side. Many in my tribe abhorred this idea; my elven heritage was something they neither cared for nor understood. Others did not feel a woman would have the skills needed to lead the tribe. But none within the tribe dared cross my father, out of respect or, more commonly, fear. Knowledge of this drove me to excel in all that I did, endlessly training for the day of my great hunt. When the day came, months ago, the hunt ended disastrously. I’ll never know if the pain that suddenly pierced into my arrow-arm as I released my shot was due to my own doing, or an outside source seeking to destroy my rightful spot as leader. After my failed hunt, I was declared as not fit for rule, and was banished from my tribe, after being told not to return until I had redeemed my honor. As I left my tribe, I cast a glance back at the faces sending me away, and caught the stare of my longtime friend, ______, whose sly smile surprised me. I turned back around and didn’t look back again.

Where are you from (city or village – you don’t have to name a specific place but I can help pick an appropriate geographic area or town for the campaign)?

Somewhere remote, and my tribe wasn’t stationed anywhere in particular, but stayed within a defined area throughout the seasons.

Do you have living family? Parents? Siblings?

My mother and elven heritage are lost to me. My father, never one to talk anything but business, simply told me that she was gone soon after my birth. I have no siblings, but my longtime friend mentioned above was like a brother to me (and at times, like a son to my father).

What did your character do before striking out into the world?

Do you have an enemy or even just a rival?

My stigma within the tribe prevented me from forming many close relationships with my tribe, although I was generally liked by the younger members. My relationship with _______ was one of friendly rivalry, whose encouragement drove me train even harder for my great hunt. I’ll never really understand his face when I left.

Why did you leave the apparent safety of home / family?

How do you plan to make a living on the road?

I am at home with the earth and can fend for myself in terms of shelter and food. If needed, I can be hired to protect livestock from targeted predators. But I am tiring of this simple life…
What is a strong personal belief you have about the world or life in general?
Though still quite young to have witness firsthand the effects of the Chaos War and the rule of the Horned King, my adventures have taken me to lands clearly plundered by cruel and careless mortals. I seek to hunt down those who destroy the natural order, and those who despoil it find no mercy with me.

Do you have a life goal, purpose or cause you champion? If not, what strong motivation drives you?

I wish to redeem myself in my father’s and tribe’s eyes.

Do you have a code of honor or set of personal tenets you live by?

I’ve named my bow, and talk to it to prepare for battle.

Spiders – large or small. A strange lady who seems to control my every movement has seemingly passed this onto me. But as fears were taught to me to be mastered, I funnel my fear’s power to destroy any spiders I encounter. I cannot attack or otherwise take any action against another person/creature in battle until the spider is destroyed.
Do you have your own personal sub-plot you’d like to explore with your character? (missing family, difficult relationship with family or a friend, making up for a past transgression, etc)
Redemption with tribe.

And, most importantly, how do you know one another? Why do you trust your companions with your life?

To be discussed tonight! 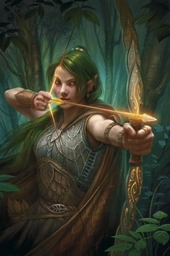